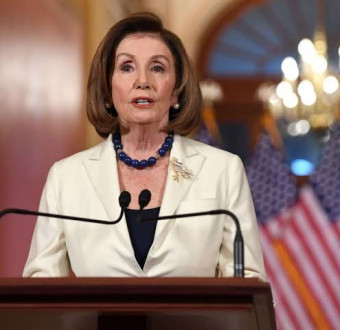 ….after the US President insulted her

US House Speaker, Nancy Pelosi has just announced that the House will move forward with impeaching the president of the United States for alleged bribery, obstruction of justice and abuse of power.

The California congresswoman told reporters in Thursday morning’s news conference: “The facts are uncontested. The president abused his power for his own political benefit at the expense of our national security, by withholding military aid and a crucial Oval Office meeting in exchange for an announcement for an investigation into his political rival.”

She added: “Sadly, but with confidence and humility, with allegiance to our founders and a heart full of love for America, today I am asking our chairmen to proceed with articles of impeachment.”

When a reporter asked Pelosi if she hated the president, she replied;

‘I still pray for the president all the time. So don’t mess with me when it comes to words like that”

The Democrat controlled House will vote on impeaching Trump before the end of the year, and if it is successful, he will have to undergo a trial in the Republican controlled senate.

Trump is under investigation by the House of Reps for allegedly withdrawing aid to Ukraine so that the European nation could investigation his political rival, Joe Biden.