A truck which was involved in an accident with two different automobiles at Outdated Toll Gate axis of the Lagos – Abeokuta Expressway, was set ablaze by an indignant mob that gathered at the scene of the incident.

The accident left 7 persons dead and 10 others injured. Injured victims of the accident had been rushed to the hospital whereas our bodies of the dead individuals had been evacuated to the morgue by officers of the Federal Street Security Corps (FRSC).

It was gathered that some officers of the Ogun State Fireplace Service later arrived on the scene to place out the hearth.

At least seven persons were on Friday morning killed in a multiple accident at Ota along Lagos-Abeokuta Expressway, Ogun State.

The accident which involved a truck laden with cements, a space wagon and a commercial bus occurred around 11:30am.

It was gathered that the accident caused by the truck was on top speed before it failed brake and crashed into other vehicles.

Angered by the deaths, a mob set the truck said to have no registration number ablaze

According to the Federal Road Safety Commission (FRSC) in Ogun State, 17 persons comprising six men, two boys, eight women and a girl were involved in the accident.

Sector Commander Clement Oladele said those who died were two adult males, three women, a boy and a girl.

“Ten persons sustained I juries and were rescued to Ota General Hospital, while the corpses of the dead victims were deposited at the IFO General Hospital Morgue in Ogun State.

“We commiserate with the families of the dead victims. The crash occurred at a spot notorious for frequent accidents that have claimed over 40 lives in the last five years.

“Motorists especially vehicles are urged to drive with caution when using that section of the corridor.

“Passers-by should also desist from turning themselves into a mob and resorting to self help. Willful destruction of public properties or accident vehicles, irrespective of the level of provocation, is a crime. There are standard ways of handling and reporting grievances to appropriate law enforcement agencies.

“Members of the public can obtain details of the crash at the FRSC command in Ota or contact the aforementioned medical facilities,” he said

A truck rammed into a commercial bus and killed 12 passengers and bus driver at Abuduka on Ogbomoso-Ilorin Expressway, yesterday.

The accident was said to have occurred around 10am at Abuduka Area, Surulere North Local Council Development Area of Oyo State.

A witnesses said the truck lost its brake while climbing a hill and rolled back before getting to the summit of the hill.

The commercial bus with registration number ABJ 14XN and the truck were headed towards Ilorin before the tragedy.

Eyewitnesses said all the passengers in the commercial died.

But Sector Commander, Federal Road Safety Corp (FRSC), Oyo State, Mrs. Uche Chukwurah, confirmed that six of the passengers lost their lives on the spot while seven others were critically injured.

She said the injured had been taken to the hospital, while the remains have been taken to mortuary, adding that he could not confirm whether the death toll has increased as at Sunday evening.

She said updates would be made public today when officers of the corps get back to the hospital, where the injured passengers were receiving medical attention.

The terrifying moment a child suddenly fell out of a moving vehicle and was almost crushed by an oncoming bus was caught on video.

In the video, the child is seen falling out of a moving bus while the bus continued on its way. Another bus coming behind managed to dodge the child. Almost immediately, a woman quickly jumped out of the moving bus where the baby fell from and picked the child up. 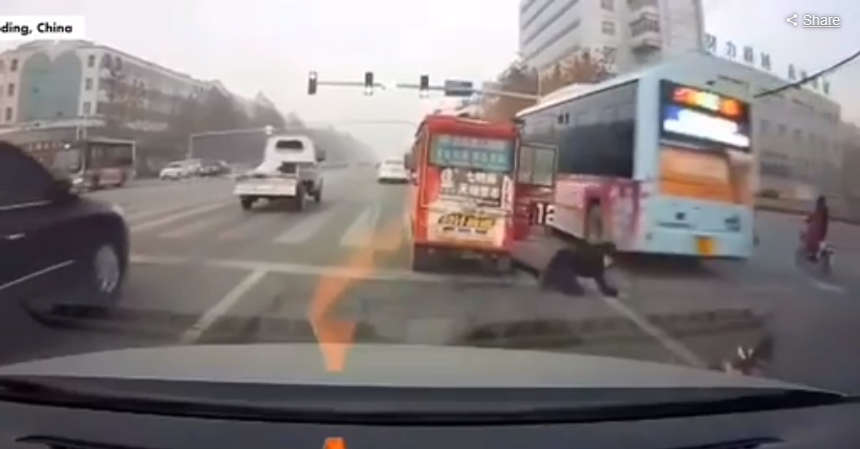 The incident occurred at a stoplight in Baoding, China.